Modeling is a cognitive tool which is used to take a topic and reconstruct it in a three dimensional representation.  It can be represented in any way possible, and there can be multiple ways of modeling the same topic.  I try to use modeling is used all the time in my science classes.  So many of the topics that we cover are unable to be seen, so students can model them in order to better understand them.  In Chemistry, we use models for different molecules.  Students would never be able to grasp what a water molecule actually looks like.  They envision a flow of liquid from a tap or a wave crashing on the shore when we talk about water.  In order to help them understand there are millions of molecules of water in the flow from the tap, we model what an individual molecule looks like.  If each student can model two hydrogen atoms and one oxygen atom (I used marshmallows), then we put the whole class together to represent what a flow of water would look like.  When I taught Physics, I used graphical models to represent projectile motion at various places in space.  Students would complete calculations of various points on a projectile arc both on Earth and on the Moon.  Afterward, they would graph both sets of data, and (if their calculations were correct) they would see that a projectile arc on Earth is much smaller than a projectile arc on the Moon.  This was one of my favorite examples because they could see the way the motion would occur.  The Earth's arc could usually fit on one piece of paper.  However, in order to graph the Moon's arc (and use the same scale), students would have to attach several pieces of paper together.  It was a great visual representation of a sometimes difficult concept for students to grasp.

Currently, I'm working on the topic of cells and the cell theory in Biology.  I must confess, modeling the cell theory seems really difficult, and I've drawn a blank to model it.  However, modeling a microscopic cell and its parts is possible.  Students can take their knowledge and apply it to an object that they can easily interpret.  An example I've used in my classroom is creating an edible cell.  Start out with some gelatin, and a bunch of other foods which represent the cell's organelles, and there's an edible model of a cell.  Of course it helps when things are similar to the actual shapes of organelles, which allows students to see, touch, and feel what a cell could possibly be like.  Another example of modeling a cell would be a candy cell.  Students use various types of candy to represent the organelles of the cell, and then put them together to create a candy cell.  Using food in class is always a big hit because students think they'll get to eat the "mistakes."

Modeling of a cell 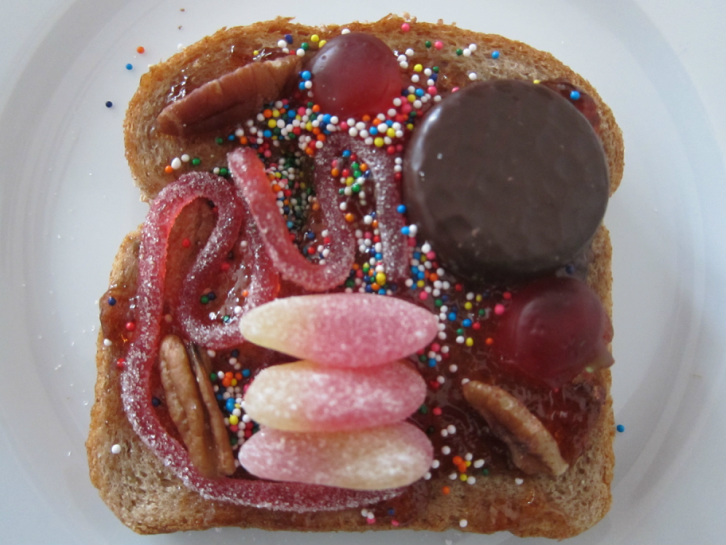 A Candy model of an animal cell.